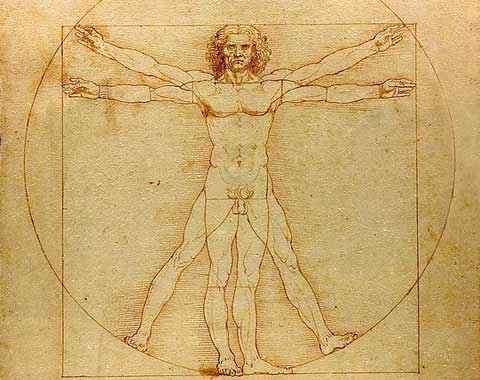 Leonardo has tried to circle and square human shape. We had better stay away from 'cylindering' or cubing the human body. © Luc Viatour

What is the BMI?

The body mass index (BMI) is the body mass or weight (kg) divided by the square of the body height (m). The unit of BMI is kg/m2. The formula had already been proposed by the Belgian mathematician, Adolphe Quetelet, in the nineteenth century. The index has been used until today; it was previously named after its inventor but since 1972 it has been known as the "body mass index".

Neither fat cubes nor slim cylinders

If tall people were to be scaled-up versions of shorter people, in the same way as big cubes are larger versions of smaller ones, then the BMI would be the weight divided by the height cubed (power of 3).

Most tall people are somewhere in-between. Therefore weight divided by the height squared (power of 2) seems to be the best approximation.

As far as health is concerned, excess body fat is negative. In contrast, an above-average muscle mass is more likely to be positive.

The BMI does not distinguish between body fat and fat-free mass. Yet statistics show that the body mass index of about 73 percent of the people is quite a significant indicator of the body fat percentage.

The SBMI has been developed for a better relevance

Despite its high relevance to health, the body fat percentage has its shortcomings. Scales for measuring body fat are simple to use but imprecise; the more accurate methods are very complicated and require skilled personnel.

The BMI, in contrast, can be calculated from two simple measurements which are reliable in most cases.

This seems to be the main reason why the BMI is still the most widely used value for estimating the body fat.

Example of an obese middle-aged woman

The four phases of the BMI development and the difference between men and women.

Example of an obese middle-aged woman